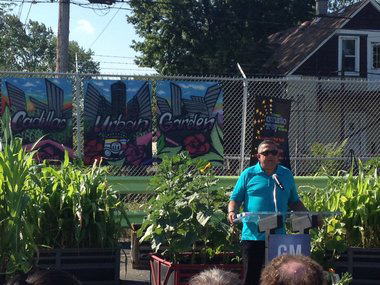 And next month, Venegas is being awarded the Consul of Mexico’s International Ohtli Award. The award is the Mexican government’s highest honor for a civilian living outside of Mexico who has devoted his or her life to “forging a new path” abroad for Mexican citizens, according to the Southwest Detroit Business Association.

As part of the reward, Venegas will receive a medallion, a silver rosette and a diploma signed by the President of Mexicans Abroad.

Venegas is the grandson of Mexican immigrants. In 1979 he won a Cadillac in a Home Builders Association raffle and promptly sold it for $12,000, using the proceeds to launch his career.

In 2000, he relocated Ideal Group headquarters to the same area on Clark Street where General Motors had made the same Cadillac that gave him the bit of luck he needed to become a successful entrepreneur.

Today, Venegas sits on the board of directors for the Michigan Hispanic Chamber of Commerce, and is chairman of the Board of Directors fro the Detroit Hispanic Development Council.

Some of his past accolades include: National Minority Business Development Council MBE Supplier of the Year; United States Hispanic Chamber of Commerce Business Man of the Year, Michigan Manufacturer of the Year, and multiple national product and safety awards. Venegas also sits on the university advisory councils for The Tuck School of Business at Dartmouth College and the University of Michigan-Dearborn, CASL.