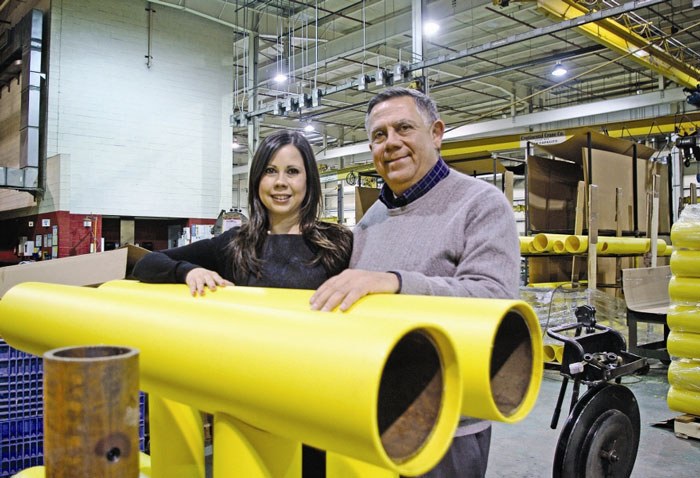 Detroit-based Ideal Group Inc. has seen recent growth from the recovery through founder Frank Venegas Jr.’s old-economy customers and some successful new-economy ventures headed by two of his children.The family-owned manufacturing and construction services company is expanding, with nearly 300 employees across five subsidiaries, as it finds new markets for products and services ranging from steel to sales of surplus equipment.

Parent company revenue, meanwhile, is up at least 15 percent to more than $200 million as customers including General Motors Co., DTE Energy Co. and even Bank of America add new locations or reopen plants.

It was a particularly good 2012 for subsidiary Ideal Shield LLC, which topped $14 million in 2012, compared with about $11.5 million in 2011, said Linzie Venegas, Frank’s daughter and business unit manager for Ideal Shield.

The 22 percent growth came from a mix of new nonautomotive customers in high-growth industries, along with the use of Google AdWords to drive new customer leads via online searches. Linzie Venegas is chief marketing officer for Ideal Group in addition to being Shield’s senior operations executive.

Jesse Venegas, meanwhile, is heading Ideal Setech LLC, a supply chain and materials manager founded in 2006 that distributes spare parts for auto manufacturers to 50 locations across North America.Also adding to the top line is Ideal Surplus Sales, formed three years ago to sell equipment inventory from shuttered manufacturing plants via online auctions. The offerings range from benches and drill bits to robotic equipment and programmable controllers — and even plumbing fixtures.

The elder Venegas estimates Surplus Sales has averaged about 30 percent in annual growth and could approach $3 million in revenue this year, much of it in single purchases via online auctions.

“When I was starting out working 15-16 hours a day, the kids were young and I hoped to make up for the years I wasn’t spending much time at home with them by having more time with them later, at work,” he said.

“Many entrepreneurs, I think, want their kids to grow up and become doctors and lawyers, but I was very pleased to see mine grow into the company and become entrepreneurs of their own as well.”

Venegas, chairman and CEO of Ideal Group, founded startup company Ideal Steel in December 1979 with $12,000 of seed capital he obtained after selling a Cadillac he had won in a Home Builders Association raffle. Linzie was born about a month later, and son Jesse nearly two years after that.

The company grew and branched out into general contracting work in 1994, about the same time Frank’s brother and company president, Loren Venegas, joined the company.

Linzie joined the company as an account manager in 2002, and Jesse joined the following year as a production and facility manager for Ideal Steel, although both had held various part-time jobs at the company since childhood.

“My brother and I are both invested in the company, and we do think some day about taking over the business,” Linzie Venegas said. “And, hopefully, someday have our own kids in the business as well. Our kids, we hope, as soon as they can alphabetize or push a broom, will also be doing work around here just the way we did.”

Upcoming projects include a $2.8 million subcontractor agreement to furnish steel in the planned Multidisciplinary Biomedical Research Building at Wayne State University and a $3 million renovation at the Tower 14 building that houses Health Alliance Plan’s Southfield offices.

One of its largest growth drivers last year was actually “blanket order service work,” or contracts in which Ideal Contracting is the designated vendor for small building maintenance and renovation projects under a certain threshold, usually $1 million.

The company handled 517 such blanket service orders totaling $54 million in 2012, a major resurgence since OEMs were shuttering plants a couple of years ago, said Ideal Contracting Vice President and General Manager Dan Kovoch.

“Ideal is very strongly positioned within GM. We do a ton of work for Chrysler and are starting to make some connections with Ford (Motor Co.),” Hayes said. “But we do a lot of that same work, and the automotive sector has been good. Things have been robust for about 18 months or so, and it’s almost the reverse of 2009 when no one was spending money.”

The Venegas family members contend new media marketing approaches and some rapid growth among nonautomotive customers outside the Midwest are building business as much as the economic recovery for manufacturers.

Ideal Shield, which makes handrails, guardrails and plastic sleeves that fit over posts in parking lots to protect cars, receives a return of more than $20 for every $1 spent in online advertising via Google AdWords.

The company uses several hundred keywords to locate searchers for bollards, or bumper posts, along with bollard covers, guardrails and other products; Linzie Venegas estimates about half of new customer leads originate online.

“We understand these aren’t the sexiest or newest things on the Internet, so we don’t market on a method of trying to make videos or messages go viral,” she said. “Instead, we use digital media as a very helpful tool along with any other tools (available), to help suppliers and interested customers to understand our products.”

Ideal Surplus Sales, the unit focused on third-party surplus equipment sales, uses traditional sales and e-commerce, including auctions on eBay or Craigslist, to sell excess stock materials, equipment and products gathered from its customers or shuttered plants and company liquidations.

Many manufacturers are in the market for obsolete equipment without having to turn to custom order replacements or expensive remodeling or plant modernization, Frank Venegas said. Surplus Sales has found a market with manufacturers in India, Romania, China and elsewhere for its stash of programmable controllers, outmoded electronic, hoists and other equipment.

“The inventory is companies that liquidated, or other people’s surplus stuff they don’t use, and we’ve sold parts via Google or in single-item auctions, or to customers that just need something you can’t find anywhere else,” he said. “That part of the business has just exploded in two years, and we expect it to get a lot bigger.”